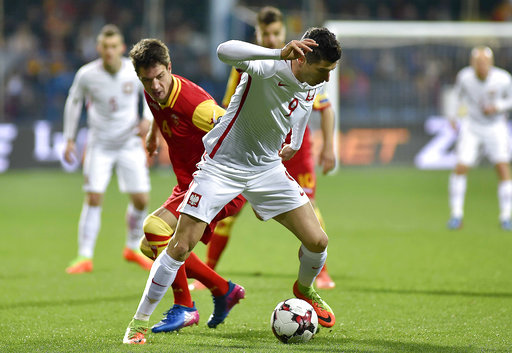 Poland are currently at the top spot of Group E as the head coach Adam Nawalka and his squad have collected 10 points from their 4 opening qualification matches. From these games, Poland scored 10 goals and Lewandowski was the man that netted 7 of those goals. END_OF_DOCUMENT_TOKEN_TO_BE_REPLACED Adam Nawalka took charge of Poland in 2013 and had successfully guided the Poland team through the Euros 2016 qualifiers and brought them all the way to the quarter-finals. The Poland Football Federation will be hoping that he can achieve the same thing with the World Cup qualifiers who are due to start in September this year.
END_OF_DOCUMENT_TOKEN_TO_BE_REPLACED

Poland made a risky move over the weekend by trying out an experimental lineup in one of their games.

Grosicki and Wszolek both scored two goals separately though so the experiment seemed to work out just fine. This gave Poland the edge against Finland to completely dominate them with a 5 point lead, leaving Finland with 0 points. They now have a winning streak of five games and are eyeing the Euro 2016.

Robert Lewandowski of Bayern Munich was left on the bench in the first half of the game. This decision was made after the loan winger from Fiorentina named Jakub Blasczykowski was also benched. However, in the late game, the winning goal was actually scored by the benched players. This was only a friendly game versus Serbia on Wednesday but currently Poland is trying out some experimental techniques and lineups that they don’t traditionally do.

Poland scored three goals before the break had even occurred so the game was actually over well before it was officially over. By halftime, the game was over as a contest and not something that could be salvaged. The Brazilian goalkeeper Guilherme also made a little bit of history as he defended the goal from Russia in a halftime as a substitute player. This allowed Russia to dominate Lithuania with a 3 to 0 game. END_OF_DOCUMENT_TOKEN_TO_BE_REPLACED